Running an Azure Databricks notebook in a CI/CD release stage

In my previous post we saw how you can use Azure DevOps to automatically push changes from one environment to another. This worked well if you have only 2 environments with no requirements to validate before deployment.

In this post I will cover how you can execute a Databricks notebook, push changes to production upon successful execution and approval by a stage pre-deployment approval process.

Azure Databricks has a very comprehensive REST API which offers 2 ways to execute a notebook; via a job or a one-time run. See here for the complete "jobs" api.

As we're trying to execute a notebook for testing, a one-time run seems to be be a better fit no? Another challenge is the execution of the REST API call will be asynchronous and will required continuous polling of the status to see if it was a success or failure. Let's take a closer look.

The API URL is structured as:

From Databricks documentation, a run-submit call submits a one-time run. This endpoint doesn’t require a Databricks job to be created. You can directly submit your workload. Runs submitted via this endpoint don’t display in the UI. Once the run is submitted, use the jobs/runs/get API to check the run state.

We suggest running jobs on new clusters for greater reliability.

From Databricks documentation, a runs-get call retrieves the metadata of a run.

You use this API call to get the status of a running job. This is the mechanism we'll use to poll our submit call

You can use bash, PowerShell or any type of scripting language to call the 2 API above but I've found using PowerShell was the simplest. Let's take a look at a snippet of a larger script.

Let's break things up a bit

As I mentioned above, submitting a new job to run will be done in asynchronous matter. This means you will simply get a run id in return with no idea if the job ran successfully or not, hence the need to call 2 APIs; submit and get. Each API requires an endpoint to which is what I set here.

Note that eastus2 is used for the region. Make sure to replace with the region your Databricks workspace is deplpyed in.

The submit API call uses the POST method which means you will need to provide a body to your API call. The body needs to be a JSON following the format specified in the API documentation. See above for documentation link.

The above JSON will create a new run called "my spark task" and will run a cluster created on demand. This cluster will be using the "5.3.x-scala2.11" runtime and run "Standard_D16s_v3" for the worker master nodes with 2 workers.

The notebook to be executed is being fed by a parameter to this PowerShell script represented by "$($notebook)", but could be hardcoded also. Example, "/shared/mynotebook"

In PowerShell you can invoke a REST API call by using the Invoke-RestMethod. I wont go into details of each parameters I'm passing except for 2:

After submitting the run you can capture the run id which will be required to get the run status. The run id needs to be appended to the polling get method API call and then can be called in a while loop. This will run until it either fails or succeeds; this can be determined by the state.life_cycle_state property.

You can get my PowerShell Script from my GitHub repository.

Note, it's a work in progress as it doesn't report back the proper error to DevOps on failure. But hey, it's a start!

Now that we've create a PowerShell script that can call and validate a notebook, the next step is to execute this in DevOps. To do this, we'll need a Databricks token for authentication as well as an Azure PowerShell script: FilePath task.

The token is generated in Azure Databricks via this method and can either be hard coded in the PowerShell execution task or you can store the token in Azure Key Vault and use the DevOps Azure KeyVault task to pull the token; that method is safer. See here to see how to add secrets in KeyVault.

Once the token is generated, in a existing stage or a new stage in DevOps, add 2 tasks: the Azure KeyVault task and and Azure PowerShell script task. 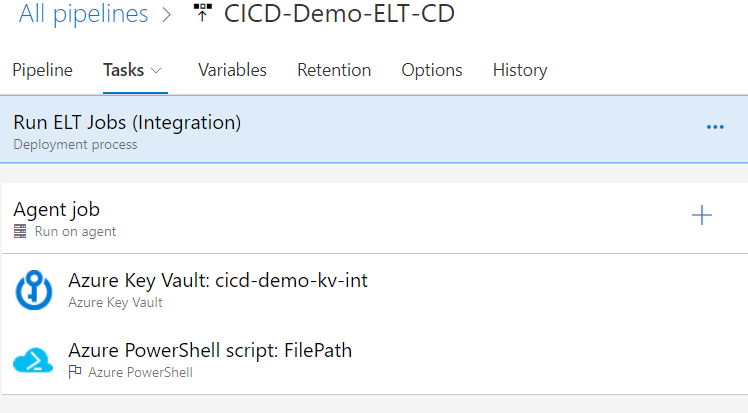 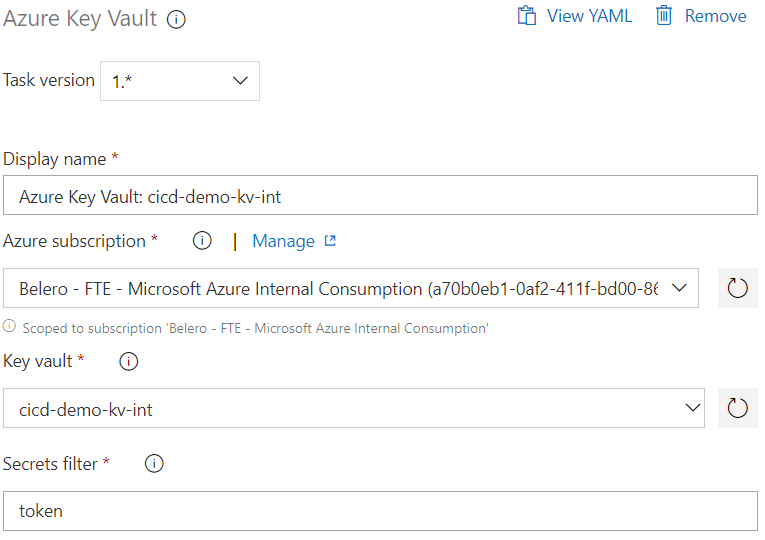 Executing a PowerShell script in DevOps is pretty easy when using PowerShell. DevOps has a cool task that allows you to run a script within the Azure echo system. Let's take a look how to configure this.

In order to configure this task, you will need to specify the following:

You're done. You can run your release if all works well, your notebook will be executed :)

Did you know in DevOps you can you setup email approval between stages? Think about this scenario, you run a notebook as part of integration testing and should it execute successfully, you kick off the deploy to Prod. In this scenario, you might want to have a manual checkpoint asking someone to approve the move to prod. This is called a pre-deployment condition. 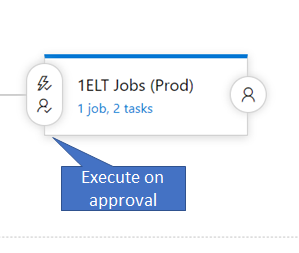 To do this, you will need have another stage after the testing stage we used above and click on the person icon / lightning bold icon to the left of the stage.

You only need to enable the pre-deployment condition and specify the approver email addresses. 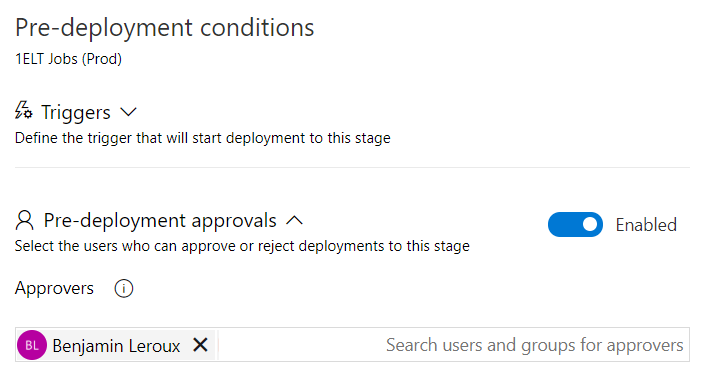 If you have any questions or suggestions, feel free to open an issue on GitHub!